[The following information is derived from the Personnel File for Stanley Hoare, held by Archives New Zealand.]

His History Sheet records his occupation as "Student" [of what isn't mentioned], of Russell Street, Gisborne. He was listed as a "Baptist". His next-of-kin is given as his Father, Henry Hoare, Engineer, of Gisborne.

According to his Attestation Form he says he had passed the Fourth Educational Standard, and was not married. He was also a member of "C" Company, Gisborne, when responding to a question about involvement with a military or naval force.

The examining Medical Officer observes that his "chest is rather below standard but he is very young & will fill out with exercise".

He was Posted to the Field Ambulance unit on 5 July 1915. On 18 November 1915 he disembarked from the Troopship Tahiti in Suez, and then on 23 January 1916 he was admitted to hospital in Cairo with Influenza. Then on 5 February 1916 he marched into Camp at Moascar. On 17 March 1916 he joined No. 2 Field Ambulance at Moascar, and a month later, on 6 April 1916 he embarked at Alexandria on the Ascania for France. 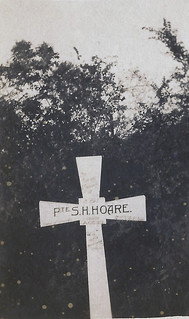 On 18 November 1916 in the field, he entered Hospital (sick), but was discharged to his Unit on 26 November, and rejoined No2 Field Ambulance. On 8 February 1917 in London he was admitted to Walton-on-Thames Hospital with "mumps". He returned to duty on 7 March, 1917.

On 12 August 1917 he died of wounds to his left arm and legs at the 2nd Australian Causalty Clearing Station.

He was buried in Trois Arbres Military Cemetery.

He was awarded the 1914-15 Star, the British War Medal and the Victory Medal, which on 4 September 1922, were sent to his father in Rudley, California, U.S.A.