[The following information is derived from the Personnel File for William Innes, held by Archives New Zealand.]

William George Innes was born 14 September 1891. So when he was exained for military service on 20 May 1915 he was 23 years old. He cited his father, G Innes, of Granton, Northumberland, as next-of-kin.

He was described as 5 foot 4 inches (163cm) and weighed 98lbs (44.5Kg) ( a second examination has him weighing 126lbs). His chest measured 31-36 inches; he had a Fair complexion, Blue eyes, and "Light" coloured hair. His religious profession was probably 'Congregationalist'. He apparently had scars resulting from an Appendix operation in 1914, but his health was satisfactory.

According to his Attestation Form, he was English-born (Glanton, Northumberland), and gave his occupation as 'Tailor'. His last NZ address was Clyde Street, in Wellington's Island Bay, and his last employer was the Union Clothing Company. He was assigned the Regimental / Service Number 3/1043.

He was not married, and was a member of the Territorial Force. This form was dated 26 June 1915.

His History Sheet itemises the main events of his service:

He disembarked at Suez on 18 November, 1915. On 26 November he was admitted to Hospital in Cairo with Gastric Enteritis. He wad discharged to duty on 10 December, 1915.

He was again admitted to hospital in Cairo on 3 January 1916 with a "Sore throat". He was discharged on 14 January, and returned to the Base Depot, from which he "marched out" to Moascar on 5 February 1916, but then returned to Hospital with Influenza on 6 March, 1916. This spell lasted until 24 March, when he rejoined his unit - No. 2 Field Ambulance.

On 6 April he embarked on the Ascania at Alexandria, bound for France. 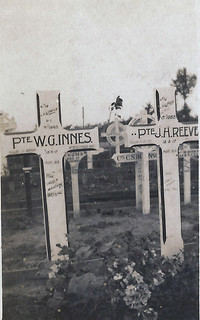 Again he contracted Influenza and was admitted to No. 2 Field Ambulance on 22 June 1916, which lasted until 1 July. On 14 October 1916 his records says "Detailed 'On Command' to 2nd Anzac Officers Rest House". He rejoined his unit on 22 December 1916.

The next entry is dated 12 August 1917, and says "Killed in Action" with the Remarks "GSW Face Right Shoulder" - presumably Gunshot Wounds to the face and right shoulder.

He was awarded the 1914-15 Star, the British War Medal and the Victory Medal, which on 25 October 1921, were sent to his mother, Mrs M.R. Innes, South View, Glanton, Northumberland, England.

His record says he was buried at Pont D'Achelles Military Cemetery, 2 miles north-east of Steenwerck, and 3 miles north-west of Armentieres. [ ]