[The following information is derived from the Personnel File for Robert Leigh Kirkpatrick, held by National Archives of Australia.]

Robert Leigh Kirkpatrick enlisted in the Australian Imperial Force (AIF). His Attestion record indicates he was born near Aberdeen in Scotland, and was a British subject aged 40 years 9/12 months old. He gave his occupation as Timber Worker. He said he was a widower, with a daughter, Mrs McFarland, of Melbourne. His brother is annotated as the recipient of his medals, and given as B.T. Kilpatrick [sic]. This form is stamped 15 December 1915. He signed the Oath on 16 December 1915, at Blackboy Hill, a military Camp outside of Perth, Western Australia.

In addition to the fore-going, he completed a physical examination, on the record of which he is listed as 40 years 9 months old, 5 foot 10 inches tall, weighing 182 lbs, having chest measurements of 37-40 inches, dark complexion, Grey eyes, and Brown hair. His religious denomination was Presbytarian. This examination occurred 8 December 1915, and on 15 February 1916 at Blackboy Hill he was assigned to 15th Regiment, 16th Battalion.

Proceeded to join unit at Etaples on 1 November 1916. Two days later he was taken on strength of the 48th Battalion. On 18 November he was admitted sick to Hospital (5th Australian Field Ambulance) with "Trench Feet & Taf [sic?]. On 25 November he rejoined his unit.

He was awarded the D.C.M. (Distinguished Conduct Medal) on 13 September 1917. The Citation read: "For conspicuous gallantry and devotion to duty. During the consolidation of a captured position enemy snipers caused a number of casualties, whereupon he crawled forward in the daylight and located two snipers, both whom he killed. His work was the admiration of all who saw them. 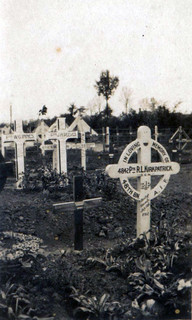 He died of wounds received in action on 5 June 1917 at the 13th Australian Field Ambulance Dressing Station. These wounds are described as Rt leg blown off, Lt leg & back severely lacerated.

A telegram in the file says "... in relation to fortyeightfortytwo R L Kirkpatrick stop In my lettergram abovementioned for fitzpatrick read kirkpatrick and for kirkpatrick read Kilpatrick".

A letter was received by the AIF Base Records office from B.T. Kilpatrick, of "Linda Valley" Yilliminning, Western Australia, dated 4 March 1922. In it he says Kirkpatrick was his full brother, that there are "four other brothers and three sisters living", their parents are dead. He says "his name was Lee Kilpatrick. I do not know his reason for inlisting [sic] under the name of Kirkpatrick, I am quite sure that he had no daughter".

The Commonwealth War Graves Commission has a record for Kilpatrick, Leigh with the same Service Number (4842) and burial cemetery.