[The following information is derived from the Personnel File for Joseph Lawson, held by Archives New Zealand.]

Joseph Johnstone Lawson was born 23 August 1893. His History Sheet indicates he was a Clerk, last employed by John Chambers & Son, of Fort Street, Auckland. His last address was Mount Eden Road, Auckland. He cites William J.B. Lawson, of Mt Eden Road as his next-of-kin. He was an Anglican.

He completed his Attestation Form on his first day of service, 20 October, 1914. He was assigned the Regimental / service Number 3/421.

According to that Form, he had passed the Fourth Educational Standard, was not married, and had not been imprisoned or a member of any naval or military force. 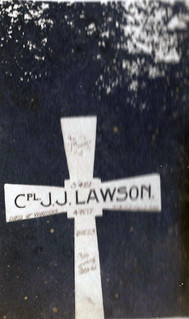 On 18 December 1915 he was again admitted to Hospital on Mudros, this time with Influenza, but was discharged to duty on 28 December 1915. On 9 January he rejoined Field Ambulance, this time at Moascar (Egypt).

On 27 February, 1916 he transferred to No. 2 Field Ambulance at Moascar. ON 6 April 1916 he embarked per Oceania at Alexandria for France. ON 22 April he was awarded 7 days Field Punishment No. 2 at Marseilles for being Absent without Leave.

On 27 August 1916 he was detached to 2nd Battalion, Wellington Infantry Regiment, with whom he served until 19 November when he joined No. 2 Field Ambulance.

On 2 April 1917 he was appointed Temporary Lance Corporal, which promotion was made permanent on 6 April. He was then promoted to Corporal on 1 May 1917.

He was eligible for the 1914-15 Star, the British War Medal and the Victory Medal. These were duly sent to his father.