[The following information is derived from the Personnel File for John Herbert Reeves, held by Archives New Zealand.]

John Herbert Reeves' History Sheet lists his occupation as Billiard Marker, employed by "Committee, Masterton Club", which was also his last NZ Address. This Sheet covers the period 10 August 1914 to 22 March 1915, during which period he served in Samoa.

A second History Sheet gives his occupation as Steward, and his last employer as "Manager, Wellington Club", which was also his last address. It says he was born 9 June 1893 at Portsmouth, and gives his religious profession as Church of England. His next-of-kin is cited as his sister, Mrs M. Joy, of the Exchange Buildings, Pownall Street, Masterton. He was assigned the Regimental / Service Number 3/1083.

Reeves had 2 periods of army service in World War 1. The first dates from 10 August 1914 and lasted until he was discharged "at own request" on 22 March 1915. He served the first 5 days in NZ, and was then sent to Samoa where he stayed until his 'discharge'. 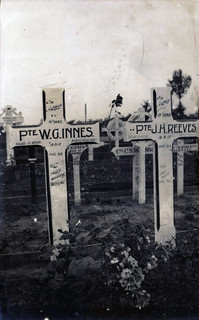 It appears he then re-enlisted on 10 August 1915, and was shortly thereafter sent to Egypt, where he disembarked at Suez on 18 November 1915.

On 29 November 1915 at Zeitoun he joined No. 2 Field Ambulance, with whom he marched out to Moascar on 5 February 1916. He continued training there until he embarked on the Ascania at Alexandria for France on 6 April 1916.

On 12 August 1917 he relinguished his appointment as Cook, and that same date he was Killed in Action. The Remarks accompanying this entry indicate GSW [gun shot wounds?] Abdomen, Chest, Legs.

His record says he was buried at Pont D'Achelles Military Cemetery, 2 miles north-east of Steenwerck, and 3 miles north-west of Armentieres. [ ]